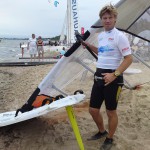 “BOSS 72 is my favorite fin, it has great lift & angle upwind and never spins out, even if you completely stop. This fin is my pick for heavier guys for marginal-light and moderate winds for sails 12 & 11. When it comes little bit stronger and 11′s becomes too powerfull so 20 knots and up, then BOSS 70 is my favourite of all fin’s  i have tested. It has exactly the same charasteristics as 72 but a little less kick so it is very handy in gusty conditions. I recommend it also for lighter winds for lighter guys 75 kg and below. As 72, the 70 never spins out and it is very stable. My choice for Worlds in Puerto Rico “
Wojtek Brzozowski POL 10

“Going with my BOSS 72 is pure pleasure, much less work than on kashy. This is the easiest fin I ever had. Especially when the strongest gusts hit you just pull the outhaul and enjoy. I was very suprised when after very good performance with big sail it appeared that it’s also working as it should with 9.8 and over 30 knots gusts.”
Filip Korczycki POL 555

“I’ve used the 38 with starboard 107 and Reflex 7.8m2. The 38 is my absolute favorite fin. I’ve never tried such a nice slalom fin. First of all, it never ever spinouts. Second the acceleration is quite amazing, you can just feel the speed increas in gusts, It’ seems like there is no topend speed limit, it just keeps going faster. Third, Control is superb. Last year I thought that 111 + 8.6 would work somehow but it didn’t feel perfect. Now with 107 and same 8.6 sail and a Boss 40 slalom fin the feeling is the opposite. It feels like a really good combo. Hopefully we will get some more slalom races soon because at least my equipment is ready”
Jon Tornwall FIN 66

“The 32cm slalom is an outstanding fin. It’s really fast, accelerates infinitely, but that’s not what matters the most in that case. And that thing is control. With this little thing the board will never fly away! I was using it with 5.5 in rough chop and 40 knots and it felt like a freeride board on glassy water and 20 knots. Just faster. Also the acceleration out of the jibes is something that I really like and what is really crucial in contests. To sum up – just a highwind machine.”
Maciek Rutkowski POL 23

“I was very satisfied with both 38 cm and 48 cm models after testing them 2 weeks in MuiNe. Winds were light to moderate, but we had few good days with 7.0 weather as well. 48 was effortlessly fast with a good grip. I clocked several 28 knots runs to my GPS in full chop using 85 cms wide Starboard and 8.6 Pryde, so control was good, too. However, I was most impressed with 38 proto. Unbelieveable grip (for the size) with very little drag. Upwind, downwind, always superb performance. You could really feel the fin tip flexing.”
Markus Huhtinen FIN10